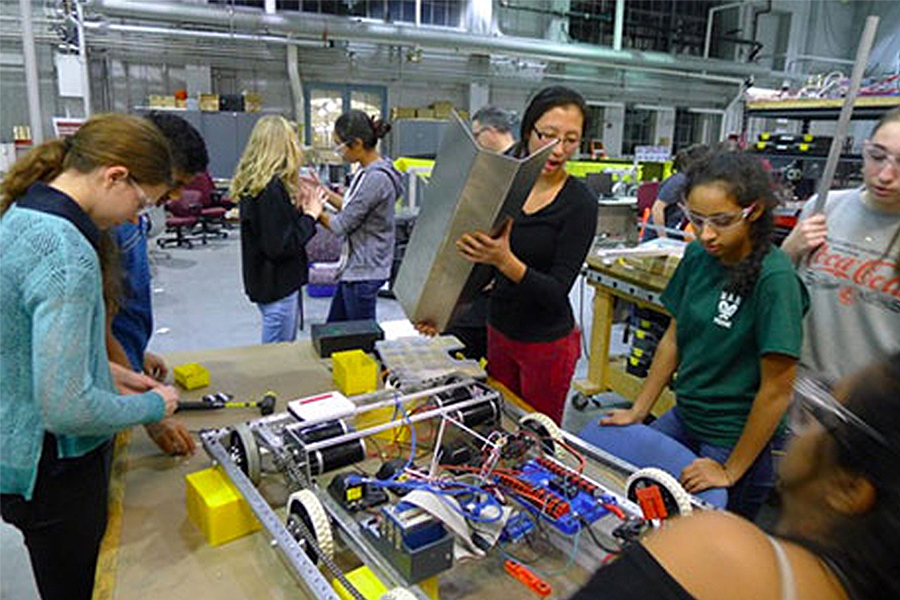 NREC to become new home to Girls of Steel

Starting in 2016 the National Robotics Engineering Center will serve as the new home base for FIRST Team 3504, The Girls of Steel.  NREC is excited to contribute to the Girls of Steel’s important mission of empowerment of girls through development of skills in STEM (science, technology, engineering, and mathematics).

The Girls of Steel team was founded in the fall of 2010 at Carnegie Mellon University. Initially, the team consisted of 24 girls from 12 different schools, and has steadily grown to over 60 girls competing in all levels of the FIRST robotics program. Their mission is to provide a place where the girls will be encouraged to think both technically and creatively. Regardless of finances or distance, FIRST Team #3504 accepts any girl who proves herself dedicated to FIRST robotics.

The FIRST Robotics Competition was founded in 1989 with the intention of inspiring young people’s interest and participation in STEM. The first FIRST competition was in 1992 with 28 teams competing in a high-school gym in New Hampshire. Now over 250,000 students compete all over the world. FIRST’s mission is to inspire young people to be science and technology leaders, by engaging them in exciting mentor-based programs that build science, engineering and technology skills, that inspire innovation, and that foster well-rounded life capabilities including self-confidence, communication, and leadership