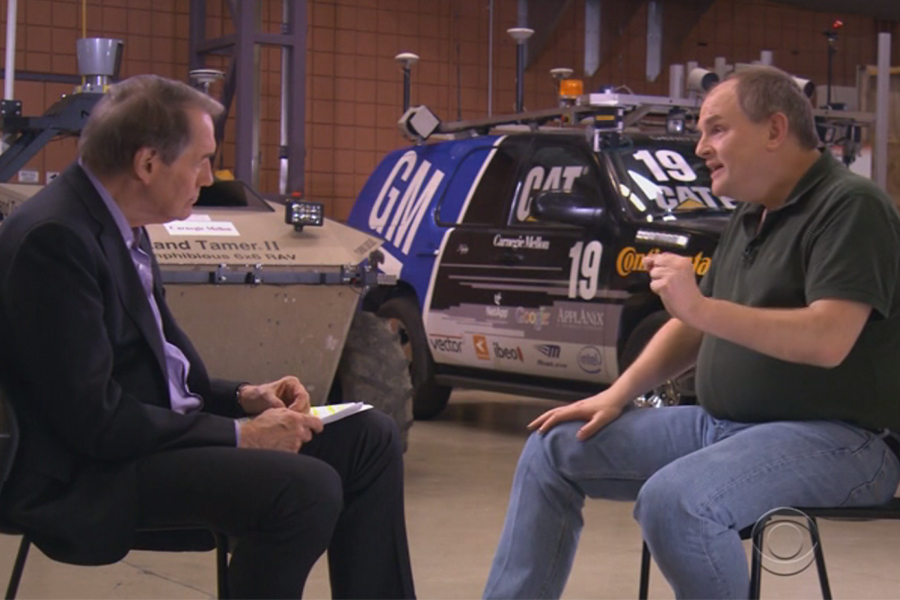 NREC was visited in the spring by Charlie Rose of CBS News to record a segment on artificial intelligence that would be featured on an episode of 60 Minutes. The episode aired on 10/09/16 and highlighted an interview with Dr. Andrew Moore, Dean of CMU’s School of Computer Science. The segment also showcased different robotic systems developed by NREC and CMU’s Robotics Institute.

The robotics segment began with footage of CHIMP driving a vehicle in the DARPA Grand Challenge. Footage also featured the Mars Rover, Boss in the DARPA Urban Challenge, Sea Wolf on the Allegheny River, and the ACTUV vessel.

The next segment featured the interview with Dr. Moore where he compared the state of Robotic technology today to the state of aeronautics technology in 1935. This segment showcased several robotic systems at NREC, including CHIMP performing human tasks that were part of the DARPA Robotics Challenge – cutting a hole in a wall and turning valves. Dr. Moore concluded that AI and robotics can be a disruptive force but also can be harnessed to solve some of the most intractable problems of our time.

As leading developers of robotic technology, NREC and CMU were excited to be a part of this look into the current state of artificial intelligence technology and to participate in the discussion of the future paths that it may take.

The full 60 Minutes story may be viewed at http://www.cbsnews.com/videos/artificial-intelligence-bryan-cranston-gorilla-doctors/